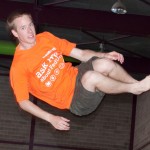 For those of you without a car I suggest reading on a little further then the first line of this blog.

Although personally I do have a car, this has not always been the case. I too went through the joys of catching public transport to get around when I first moved to Ballarat and, even now, as a proud motor vehicle owner, still catch the bus and train where possible.

My biggest tip (yes, I’m giving this away early) before you even try to get on a bus or a train is to get yourself a concession card. If you don’t have a Health Card from Centrelink and you’re studying a full-time load (three or more subjects) then get a student concession card. The form can be downloaded from the PTV website (all links below) and will only cost you $9 for the year and will save you a fortune! Once you’ve filled out the form you need to get it signed by student admin.

Once you have your concession card you’ll need to get a Myki card. Myki’s are like library cards for the bus/train. Myki is how you pay for your travel, there isn’t such thing as a paper ticket for Ballarat town buses and trains to/from Melbourne anymore. Myki is the only way to travel. You can get Myki cards from a number of locations, including some local newsagents, the train stations, or online from the Myki website.

Ok, so you have a concession card and a Myki. Now you can jump on.

Trains to/from Melbourne and Ararat depart the Ballarat train station, which is located on Lydiard St in the centre of town. The train ride to Melbourne takes around an hour and twenty minutes depending on the time of day. Monday to Friday they generally run every hour.

Don’t forget to touch on your Myki card at one of the Myki readers on the platform before you get on the train, and touch off when you hop off.

A return trip to Melbourne on a concession fare will set you back around $13 (off peak) during the week and $18 on the weekends.

Buses are a great way to get from town out to uni. With one every half hour in both directions Monday to Saturday, it makes it both a convenient and cheap way.

Buses to uni depart a number of locations from the city, including the Train Station, the Camp Street campus, Big W and Bakery Hill.

When looking for the bus, it’s the number 10 bus to ‘Buninyong via University’ that will get you to uni.

An all day concession fare will cost around $2-3, which makes it much cheaper then starting your car up.

When you get on the bus, remember to touch on your myki and touch off when you’re getting off.

The bus works on a ‘Stopping on demand’ system. So if no one is waiting for the bus or wanting to get off then it won’t stop. This means that if you’re standing on the side of the road waiting for the bus, just make sure to catch the driver’s attention with a wave or something similar just to make sure they see you.

Similarly when you are on the bus and want to get off, wait until your stop is the next stop and then push one of the stop buttons.

So that’s all you need to know about getting around in Ballarat, until next time…

Please prove that you are not a robot.

Powered by WordPress | Hosted by Edublogs | Protected by CloudFlare