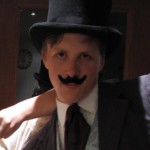 Before you freak out, I change any and all undergarments and socks. I’m not that disgusting. Yeesh. And if it had been a hot or strenuous day, or if I spilt something, then that outfit wouldn’t make it into the esteemed (and apparently rebellious) ‘second day’. But if the shirt was still perfectly crisp and clean, then I’d wear it again. Those other shirts can wait their turn.

This all made perfect sense to me. It was a logical pattern. Why, after all, would I not wear the same shirt again if it was still clean? If I forfeited it for another shirt, then I’d have to do something with shirt no. 1. I can’t put it away with all the unworn stuff, but it would be a waste of a wash. Being the lazy (and generally poorly organised) person that I am, there was no way I was going to try and juggle a bunch of outfits and remember which ones I’d partly worn. So instead I’d wear an outfit for two days, throw it all in the washing pile, and move on to the next one.

So it’s fair to say that my world was thoroughly rocked when I discovered that this isn’t cool. Apparently I’d been doing it wrong for the past 24 years. I’d have to rethink my system and make some sort of futile attempt to keep track of a bunch of half-worn outfits.

Except I don’t really want to, because I still don’t get the ‘why’. So most people change outfits, alright. I can deal with that. If you all want to be pedantic that’s fine by me. But why do they do it? And why do they want me to do it as well? Especially when, as a student, I don’t exactly have the luxury of owning a thousand outfits. I’m pretty much limited to four. So people are going to see a repeat somewhere.

Is it borne from some sort of attempted affluence? Are we meant to all pretend that we own so many outfits we simply throw out a top after wearing it once? As if we all own butlers and wardrobes the size of a house and take our groomed poodles for walks in expensive handbags.

Where does this come from? And why do people perpetuate it?

On another note, if they don’t burn these things how on earth do these ‘single-wear-only’ people store their once-worn outfits? Am I meant to be washing everything after wearing it once? Or do these magical people have an extra ‘outfits I don’t want people to see me in again for three days at least’ wardrobe?

So, mostly because I’m poor and lazy, but partly because I still don’t get it, I’m going to keep going with my system. I might try and convince myself it’s some rebellious action, but it’s really the ‘poor and lazy’ thing.

What do you think? Should I stop this filthy habit immediately or carry on? Do you wear the same outfit twice in a row? If not, why not? Let me know in the comments.